Kay-Nah-Chi-Wah-Nung is a sacred place, a living link between the past, present, and future through a continuum of time, a concept which is integral to the world view of the Ojibway. Its strategic location at the centre of North American waterways has allowed interaction with people from many other areas.

Kay-Nah-Chi-Wah-Nung has deep cultural and spiritual meaning to the Ojibway of the Rainy River First Nations and all Indigenous peoples throughout North America. These lands hold the record of 8,000+ years of recurring use or habitation and contains the largest group of burial mounds and associated village sites in Canada.

Kay-Nah-Chi-Wah-Nung offers both guided and self-directed tours of our Interpretive Galleries and our extensive trail system. Guided tours are facilitated by trained heritage interpreters, and visitors will learn about the history of the mounds and the people who lived here.

the place of the long rapids

Kay-Nah-Chi-Wah-Nung was declared a National Historic Site in 1970. Encompassing close to four kilometers of shoreline, today’s archaeologists now know that the Place of the Long Rapids was once home to numerous villages and campsites, as well as at least 17 burial mounds. Home to the Ojibway people in the past century, the site was home to the Long Sault Reserve from the time of the signing of Treaty No. 3 in 1873 until 1914. The site contains evidence of house structures, trails, gardens, and associated activities. 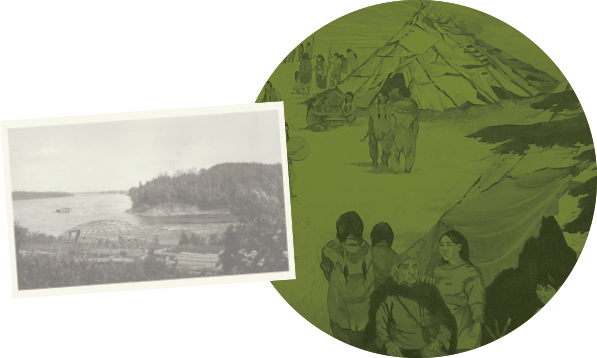 Find out what’s going on at Kay-Nah-Chi-Wah-Nung Historical Centre and the community of Rainy River First Nations!

Consider our facilities for your upcoming event. From business meetings, conferences, and weddings to team building activities!

Book a guided tour of the mounds and our outdoor trails, as well as inside the Centre by trained heritage interpreters.